We’re back with a throwback in this installment of Overland Vehicle of the Month. Remember the DUCK? Meet its British brother. Here’s to the Queen! 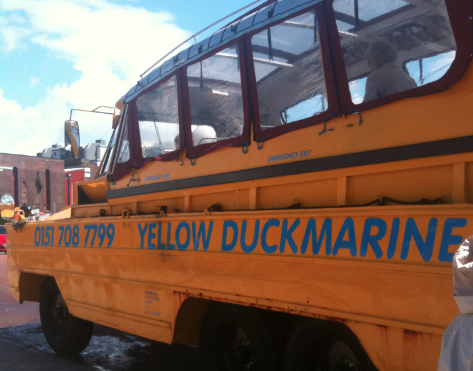 Ever consider riding in the style of Her Majesty, the Queen of England?  We thought so.

As part of the Queen’s Diamond Jubilee celebrations in May 2012, Her Majesty enjoyed a special view of Liverpool not by a bedazzled horse carriage; oh no, but by The Yellow DuckMarine.

The Yellow DuckMarine is just as it sounds: a duck boat, specifically yellow, that travels by land and by sea.  Sound familiar? Remember we rode those Boston Duck Boats back in August.  Quick recap: Duck Boats are a “six-wheel-drive amphibious trucks jointly developed by the United States government and GMC during World War II.”  Men needed to transport their cargo and themselves where no ports existed.  Thus, the Duck was born!

Liverpool is a Duck Boat paradise with its Waterfront built around “the most famous docklands in the world.”  The tour starts at the Albert Dock, which is “the most visited multi-use attraction in the United Kingdom outside of London.”  It seems like the Albert Dock is like one maritime Disney World and hosts numerous attractions like the Merseyside Maritime Museum and the Beatles Story, as well as hotels and restaurants.

For approximately 55 minutes (30 minutes on land, 25 on water), duck riders will see many important historical landmarks, including the building where the sinking of the Titanic was announced.  Riders learn that tragically, the list of the deceased was so long that the announcer had to keep throwing paper off the building.

The Yellow DuckMarine operates throughout the year, with the exception of Christmas Eve, Christmas Day, Boxing Day and New Years Day.  The first tour starts at 10 a.m.

All in all, The Yellow DuckMarine is a sweet combination of learning important world history AND singing.  No wonder Her Majesty enjoyed the ride; so will we.

Posted in Vehicle of the Month. RSS 2.0 feed.