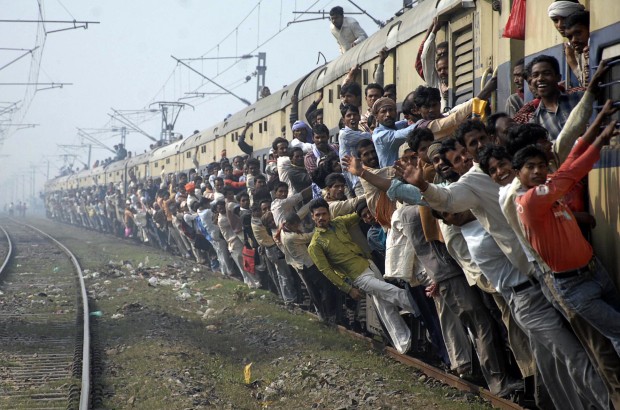 Once described as the ‘Lifeline of the Nation’, Indias rail network today remains the countries most important means of transport. The rail network is the second largest employer in the world, after the Chinese state army, and transports a stagering 30 million passengers daily.

Eight million of these passengers board and dismount in the city of Mumbai on their daily commute to work. Conditions are bad with trains carrying four times as many passengers as they were designed to. Excess passengers ride on the roof or hang out the side of the carriages. Bodies being wheeled out from railway platforms are a common sight with a reported ten deaths a day.

Two years ago, a group of passengers frustrated by the lack of a modern transport system decided to band together to take a stance. They declared they were going to strategically evade paying for any ticket by forming an organisation called the Association Of Ticketless Travellers.

The concept is simple yet genius. To join the association, one is required to pay an annual fee. One can then ride the transport system with reckless abandon without ever paying for a ticket. In the unlikely event that you are caught, the association will pay your fine. It’s a sort of insurance scheme for train anarchists who hold a gripe against the network or those unwilling for fork out for daily tickets.

Some say this association is an urban myth, others say that the association has now been disbanded. Write in and let us know if you’ve heard of it before and if any other systems like this exists around the world.