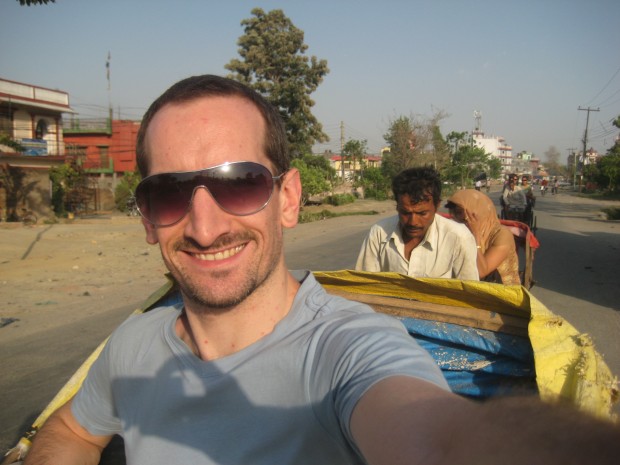 Niall is a 30-year-old Irish chap, seven months deep in a four-year round the world trip without flying. He works as a web designer from the road, and writes a super blog called Disrupting the Rabblement, which is all about thinking for yourself, living your dreams and pissing off zombies. Stephen and Will are massive fans!

It used to be at least twice. Now it’s been almost a year since my last flight, fifteen countries ago.

I left Ireland seven months ago and arrived in Kathmandu at the end of April. My longest single bus/train ride has been three nights aboard the trans-Asian express, from Ankara to Tehran. Longest boat trip so far was a four-night cruise from Dubai to Bombay.

Iranian buses are remarkably luxurious and ridiculously cheap. You can get your own big lazy-boy seat off to the side, and they have an attendant on board to bring you snacks. Bus station staff can’t help you enough either.

An overnight ghetto bus from the India-Nepal border to Kathmandu. Nare a bit of leg room, and it felt like we were driving along a goat path the entire way. All that was missing was a chicken on my lap and a few passengers on the roof.