Some of the best modes of transport aren’t necessarily the most efficient, but as the old saying goes – it’s the journey not the destination. That is particularly true of some of the great train journeys in the world. For example, consider The Glacier Express. This train in Switzerland takes you from St Moritz to Zermatt – the journey time is nearly eight hours. There are far quicker ways to travel between these two points – it is only a distance of two hundred and ninety one kilometres, but in terms of an amazing journey you can’t beat the long slow ride on The Glacier Express

The Swiss have a slightly perverse sense of humour, and they take pride in the fact that The Glacier Express is the world’s slowest express train. The use of the word “express” in its title doesn’t actually refer to the speed that it travels at but indicates that you don’t need to change trains at all – it is a direct train that takes you the entire journey.

Why travel on The Glacier Express?

If you want spectacular mountain views and a unique appreciation of the Swiss Alps, then there is no better way than travelling on The Glacier Express. Your journey will take you across two hundred and ninety one bridges, through ninety one tunnels, and at the highest point you will be at two thousand and thirty three metres above sea level. Through the steepest parts of the journey the train effectively spirals up and down the sides of the mountains – travelling almost a “W” shape in terms of altitude with the highest point of the journey in the middle. Your views are maximised if you travel in one of the first class panoramic coaches that has huge windows that curve over the ceiling of the carriage.

All year round travel 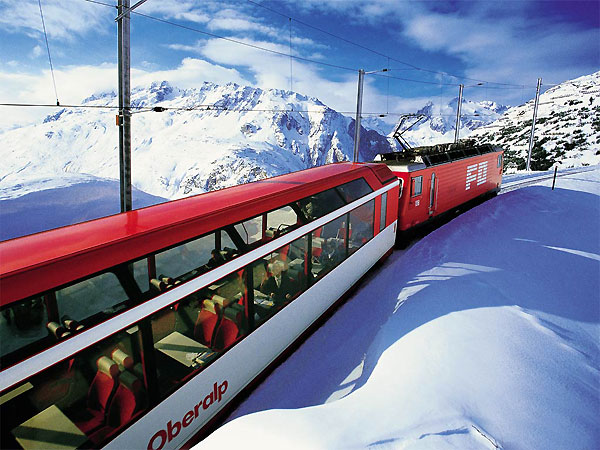 When the Glacier Express first opened in 1930 it wasn’t possible for the train to travel during winter as the track became snowbound at its highest point known as the Furka Pass. In 1982 however, the Furka Base Tunnel was opened which changed the route of the train and meant that year round travel was possible. It was at this point that The Glacier Express began to be promoted as a tourism opportunity to experience the Swiss Alps and passenger numbers quickly grew from around twenty thousand passengers per year in 1982 up to over two hundred and fifty thousand passengers per year today.

The route taken by The Glacier Express is divided into four different sections – the Albula Line; the Oberalp section; the Furka section; and the Mattertal line. This slow moving train effectively enables you to experience all of Switzerland as you travel – the two famous resorts of St Moritz and Zermatt as well as through the regions known as the Valais, the Engadine, and the Gotthard Pass which is one of the lowest parts of Switzerland, this is where the Rhone River and the Rhine River begin.

Sit back, get your camera ready, and embrace the slow, steep, windy ride through the Swiss Alps on The Glacier Express – truly one of the world’s great train journeys.

If you are looking for other great train journeys around the world then discover more with Railbookers.