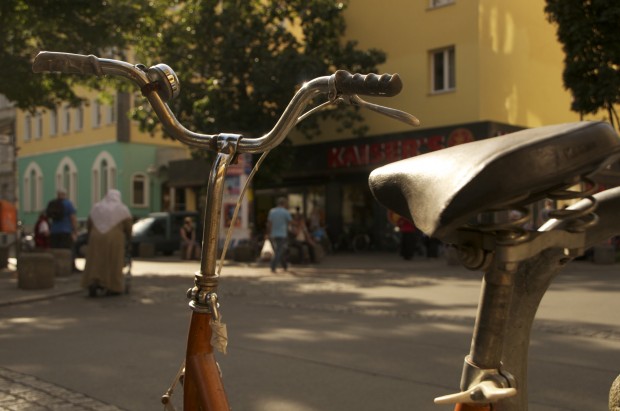 I’m in Berlin for all of two minutes before I spot my first cyclist. Cocksure, helmet-less, savin’ the planet, this guy’s all business as he does one of those fancy-hand-signal-things to indicate in Cycle Code he’s about to make a turn. I get a great, up-close look at his 10-speed as my friend almost hits him with her car.

She tells me with a cavalier laugh that this isn’t the first cyclist she’s nearly run over in Berlin. Apparently they’re everywhere here; they’ve got the right-of-way and aren’t afraid to exercise it. I continue to look out the window and, sure enough, there appear to be almost as many commuters on bikes as there are in motor vehicles.

I generally tend to assume that people who use bicycles as their main mode of transport are better than me, and the cities that perpetuate them more progressive than my own. (Though it’s worth noting New York is working on getting its own bike sharing program up and running.) I also have a genuine admiration for city cyclists, because biking around crowded urban sprawls can be dangerous, (especially with drivers like my friend tooling about.)

But the truth is, Berlin is a pretty ideal city for bicycling. For the most part it’s flat, which makes it easy to pedal around. It’s got

fairly wide streets that are often also accompanied by bicycle paths. The paths wind in and out of the city’s different neighborhoods, connecting the various parks and canals that it boasts. All in all, I was pretty impressed by how freaking delightful biking around Berlin seemed to look.

Berlin also makes it as easy as possible to take your bike with you if and when the paths end. Bikes can be taken on the metro, the bus, pretty much anywhere, so a commute that requires motor transit at some point can still be at least partially pedaled. I don’t think I got on the subway even once without seeing cyclists and their bikes on there too. (And my inept sense of direction required quite a few subway rides to get my routes right.)

It’s estimated that about 500,000 cyclists hit the streets of Berlin daily. That’s 15 percent of overall traffic in the city. The capital’s senate mandated again this year that bicycle paths continue to be expanded, making it increasingly easy to commute on two wheels. The best part is that – my dear friend excluded – drivers generally seem accurately aware and respectful of cycling commuters, and biking around the city is safe.

For those visiting Berlin like me, there are also myriad options for renting a bike. Considering the city and its main tourist attractions are fairly spread out, that means fewer blisters and more time saved, as sightseeing by bike is economically and financially efficient. Berlin also has its own bike sharing system, called DB Call-A-Bikes. You call the phone number associated with bikes stationed around the city to unlock them, head out into the sunset, and deposit the bike safely at the closest station to wherever you end up. The maximum charge for using a call bike is 15 euro for the day, or eight cents a minute for shorter trips.

Bicycling is a great way to get to know almost any city, but Berlin makes it practically impossible to ignore the option. I’ve never been to a city that gave me such a desire to bike around. So a heartfelt apology to that guy we almost hit – you were right, dude. I’m going to go study my bicycle hand signals now.