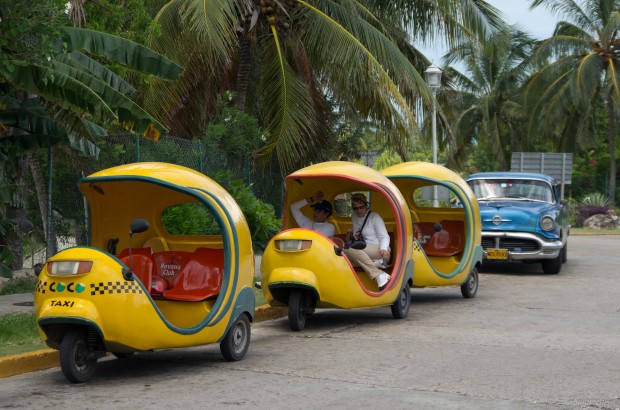 Hoverboards. Broomsticks. A DeLorean fitted with a flux capacitor. Fiction is full of weird and wonderful forms of transport. However, you don’t need to turn to the big screen to find unusual vehicles. From the streets of Havana to Thailand’s Chao Phraya River, here are some of the most bizarre ways to get around a city.

Gap year travellers will be familiar with the tuk tuk, an auto-rickshaw prevalent throughout Asia. However, visitors to Havana may find themselves riding the tuk tuk’s less famous cousin, the Coco Taxi. These distinctive yellow

The Beer Bike is one of the strangest contraptions ever to take to the streets of Munich. Essentially a roving bar, the Beer Bike is propelled through the city by a group of beer-swilling, pedal-pushing riders, and steered by a sober tour guide. These boozy bike rides are highly popular with stag groups, although alcohol-free sight-seeing trips are also available.

Britain’s capital is full of distinctive forms of transport, from red Routemaster buses to the iconic London Underground. However, the weirdest form of London transport is the Duck Bus – an amphibious truck. A popular attraction, the bus ferries tourists around some of London’s most famous landmarks, before taking to the River Thames for a short cruise. The Duck Tour franchise hit the headlines in 2013 for all the wrong reasons – two similar vehicles sank in Liverpool, whilst the London bus caught fire. Following an investigation, the vehicles were banned from entering the water.

City boats are often tourist attractions, generally avoided by the local population. However, the Bangkok water bus is a popular form of transport for locals and tourists alike. Serving the city’s extensive network of waterways, the ‘buses’ are low-lying, open-sided wooden boats. Part of the novelty of using the water bus lies in the plastic sheet “walls”, held up by passengers during journeys as a protection against spray.

Bamboo trains are small motorised carts, built to run on the railway. Known in Khmer as nori, these can be privately hired to run from the Cambodian town of Battambang to a nearby village. As precarious as they are novel, the carts can travel at speeds of up to 40 km an hour. Plans have been made to run bamboo trains from the coastal town of Sihanoukville, through Phnom Penh to the Thai border – but so far this has failed to come to fruition.

For the majority of New Yorkers, the walk to work involves grubby sidewalks, busy intersections, and crowds of people. However, the lucky residents of Chelsea can take the High Line, an elevated park which stretches for a mile across the city skyline. Built on the former New York Central Railroad, the project has rejuvenated the local area, boosting tourism and raising property prices.

Greenland’s barren landscape means there are few roads between settlements. Instead, residents rely on alternative forms of transport. In Sisimiut, one of the largest towns, dog sleds are enduringly popular. Despite the prevalence of snowmobiles, the ancient tradition of dog sledding has persevered into the 21st century – Greenland’s population of working dogs is estimated to be around 25,000.