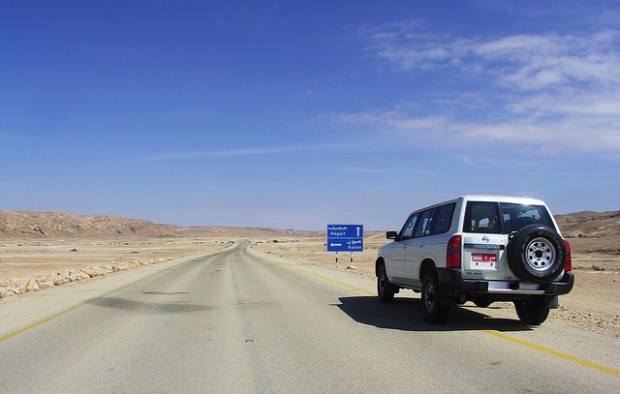 We as travelers give up a lot of personal freedom in exchange for a different kind of freedom. While this may sound incongruous , it is a simple fact. We adhere to bus schedules, train schedules, ferry schedules, airline schedules and all other schedules to simply get where we want to go.

Having a car of one’s own is an incredibly freeing part of traveling. It allows for spontaneity and an increased number of choices. My husband and I have traveled to and lived in many parts of the world over the last two years, and for most of that time we have been without a vehicle.

Currently, we live in Abu Dhabi, and have recently purchased a car. It is shiny and gray and perfect, but the things that it lacks are the things that make it so wonderful. It lacks a rental agreement, a lease expiration date, and that nagging knowledge that it belongs to someone else.

Our first trip in our new car was to be a visa run to Oman. Visa runs are nothing new in our lives, but this one was different. It was to be our first visa run that involved a land-border crossing, and the first such border crossing in our own car. In addition, even though we’ve traveled all over the world together, this was to be our first real road trip together, and, as such, came with its own sense of excitement.

Even though the Oman/UAE border is only about 90 minutes from Abu Dhabi, we simply could not just cross the border and turn around. Our destination was Muscat, Oman’s capital city, which is 300 miles from Abu Dhabi. We set out early in the morning and headed out through the desert.

The highways were mostly deserted until we neared the border town of Hatta. As is usually the case, crossing a land border requires a number of steps. First there was the UAE exit stamp to obtain at the hut on the side of the road. Then there is the search of the trunk. After that we stopped at another shop to buy car insurance. Finally, we stop at Omani immigration to officially enter the country.

Once the formalities were taken care of, we continued on our route to Muscat. The map we had used indicated that the highway would follow the Arabian Sea coast all the way to Muscat. It soon became clear that was not the case. Our first turn toward the ocean led us to the fishing pier, which, as usual, smelled like a fishing pier and warranted a hasty retreat.

We resumed our southerly course and reached the city of Muscat a few hours later. The city is lovely with beautiful mosques, wide roads and lush, green foliage that was delightfully unexpected. The sun was setting over the Arabian Sea as we finally found a lovely beach park. We watched the locals swimming, picnicking and strolling along the promenade as the waves rolled in. It was a good end to a great day.

We planned our return trip to take us through the mountains of north central Oman to the border crossing at Al Ain, UAE. The day began hot and grew hotter by the hour. The sun seems to bounce from every surface, tricking the eye into thinking that everything is beige. However, as the day wore on and I looked more closely, I began to see the intricacies and nuances of the desert. The colors of the sand actually vary by grain, the ridges of the mountains morph from brown to gray to black to red, and the green of the palms at the oases is staggering in its intensity.

We passed small towns, roadside mosques, and camels nibbling the bushes beside the highway. We stopped for gas, ate strange, sweet snacks, and talked for hours. We spotted a mountain in the distance and, before we knew it, the border was looming ahead. After a quick stop at immigration, we were back in the UAE and an hour from home.

Few of us are strangers to the road trip. We compile the playlists, consult the maps, load the coolers, check the oil, fill the tires, charge the phones and pack our bags. We seek out information on things to do and see along the route. We try to anticipate all the things we need and all the things that could go wrong. However, when all is said and done, the road trip is essentially the same as any other type of travel. We plan as much as we can, leave the rest up to the universe, put on our seatbelts and go.

But I really like going in my own car.