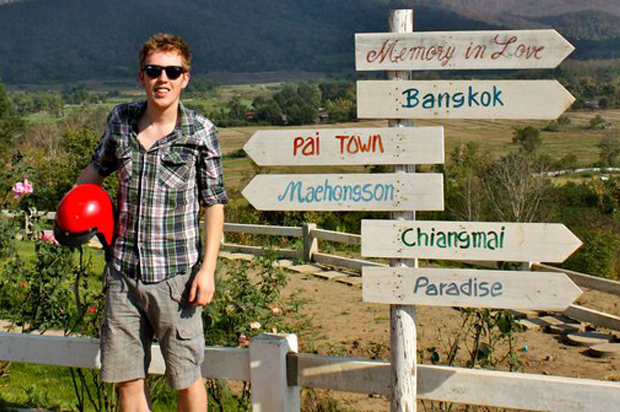 Stephen Wright is the co-founder and designer of DontFlyGo and TravelSexLife. Since 2008 he has lived in Vietnam, Turkey and now Shanghai China where he works in film production.

I confess that I’ve already flown nine times in 2012. This was partly because of work and partly because of my travels over the Chinese New Year holiday. One of the reasons I started DFG was to try and reduce my own carbon footprint. I’ve taken the first step by purchasing a bicycle which I now use on a daily basis.

I’ve never travelled for more than a three week stint so I’m yet to undertake an epic overland journey. However, in 2009 I traveled the entire length of the Nile (at least the part in Egypt) on an overnight train.

Overnight trains – without a doubt. There is something very romanic (dare I say ‘Tintin-esque’) about going to sleep in one place and waking up in another. I especially love the long distance trains in Vietnam as they have classic-style private cabins and a food cart that does the rounds at dinner time.

One of my favourite ever travel experiences was in the summer of 2007 when I rented a bicycle and cycled over the Golden Gate bridge into Marin county. Having completed a big loop I hopped on the ferry back to SanFrancisco and watched the sun set over the city while crossing the bay.

The most nightmarish journey i’ve ever had was on a six hour bus from Phnom Penh to Siem Reap. The combination of dysfunctional AC, blaring Cambodian pop music, unrelentingly bumpy roads and a perpetually vomiting child next to me made it all too much.