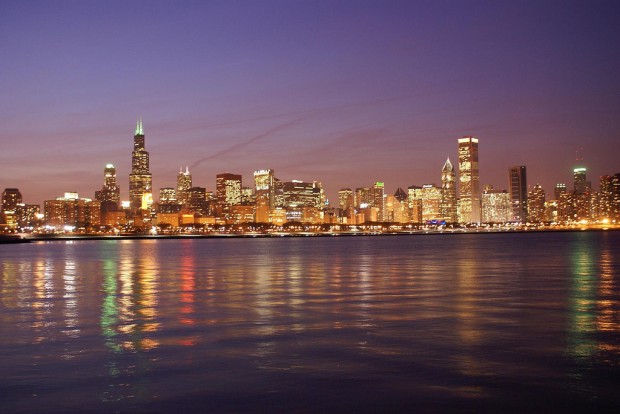 Today we turn over DontFlyGo.com to regular guest poster Felicia Baritz-Savage who talks to us about environmentally friendly travel in Chicago.

Travel is a worthwhile endeavor in so many ways; it expands our horizons, opens our eyes to new cultures and exposes us to food, people and sites we would never otherwise encounter. Unfortunately, though, travel can be decidedly unfriendly to the environment; the consumption of fossil fuels and the waste produced by all those roadside fast-food meals alone can drastically increase the average wanderer’s carbon footprint while on a typical vacation.

For this reason, it’s wise for the environmental enthusiast to consider alternative vacation destinations. Many cities all over the world offer green travel options and events that support the environment and related initiatives. One such city is Chicago; while this may not be your typical tropical beach destination, the Windy City has a lot to offer to the environmentally conscious tourist. In fact, the city won the 2012 Sustainable Community Award presented by the Business Civic Leadership Committee, the prize for which was $20,000 worth of trees to be planted throughout the town. Consider the following green activities and events to keep you busy when you travel to Chicago.

If you happen to be traveling to Chicago around Earth Day in April, several events take place each year to commemorate this special day. Included among these is the Parks and Preserves Clean-Up hosted annually by the Friends of the Parks at various locations throughout the city. If that sounds a little too much like work for a vacation, other happenings include nature walks and numerous special events offered by local restaurants and retailers.

Speaking of restaurants, the Windy City is home to the Green Chicago Restaurant Coalition, an organization working to promote sustainable practices like the use of local produce among Chicago’s restaurants. There are numerous restaurants on the Coalition’s list of guaranteed green restaurants, notably including the Frontera Grill and Xoco, two of the establishments owned by well-known television chef Rick Bayless.

Every Wednesday and Saturday from 7 a.m. until 1 p.m., visitors can stop by this extensive farmer’s market located at the south end of Lincoln Park. The market offers the opportunity for area farmers to sell their produce directly to local consumers, and also makes for a great tourist stop. There are often chef demonstrations taking place (including one with the afore-mentioned Chef Bayless slated for July 11) and an annual barbecue.

While it’s widely known that Chicago is home to a large number of exciting museums, the average tourist may not be aware that many of these institutions have adopted environmentally friendly practices that help reduce their carbon footprints, and some have even partnered with other businesses in the community to promote green living. Included on this list are the Museum of Science and Industry, the Adler Planetarium and the Shedd Aquarium, among others.

Travelers interested in gardening and plant lore will be particularly interested in a visit to one of the impressive greenhouses located in the parks of Chicago. Many of the plant species found in Chicago’s area parks are grown in one of two locations: The Garfield Park Conservatory celebrated its 100th anniversary in 2008, making it one of the nation’s oldest greenhouses, and boasts over a thousand different plant species. The Lincoln Park Conservatory is not as large, but visitors will find an equally diverse offering of plants as well as a separate house used to display rotating seasonal exhibitions.

It would be possible to create a far longer list of green events and destinations in the Chicago area. The above only begins to scratch the surface of available entertainment options for environmentally conscious tourists looking to experience a new city while continuing to maintain and support green practices and a smaller environmental footprint. Therefore, Chicago makes an ideal destination for the Earth-conscious traveler.

Do you have any more tips for environmentally friendly travel in Chicago?