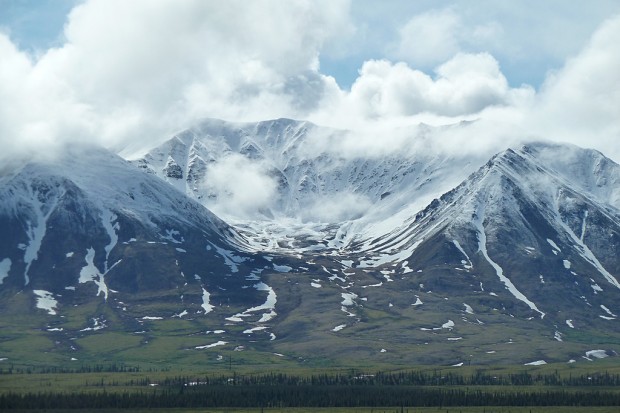 The great frozen North has always held a fascination for adventurous souls; that rugged land of vast and isolated natural beauty has tempted explorers for hundreds of years. Alaska, an American state separated from the U.S. by Canada to the south and east is sure to fulfill those desires for remote, wild beauty. Situated as it is on the pacific north west, it features a stunning range of coast and mountains, arctic tundra and forest, some of which no human has ever stepped foot on or seen. It also features a unique bio-diversity of wolves, foxes, moose, fish, bears, whales, birds and plants in a delicate eco-system that needs protecting.

Eco-Tourism has become increasingly popular as tourists are becoming more and more environmentally conscious, and it strives to allow people to still visit these places, while leaving the smallest ecological footprint possible, to maintain and care for these lands. Alaska is also home to rich and old native-american cultures of remarkable diversity, these cultures have faced many difficulties since the arrival of Europeans and tourism can potentially disrupt these peoples and their lands. True eco-tourism should show respect to the people who have traditionally lived here, respect their food sources, lands, and ways of life. Ideally eco-tourism in Alaska should be done with native peoples of Alaska, allowing them to benefit economically, present their people and cultures from their own perspectives and preserve their cultures by providing jobs for youth to stay and practice traditional ways of life; crafts, dance, languages and to retain self-esteem and pride in their culture.

This article will provide a list of eco-tourism options available to those brave souls who want to spend their vacation doing something other than sipping margaritas on white beaches. Alaska airlines can you get there, then on to the northern lights, go dog-sledding, and fishing in some of the most pristine waters on the planet.

The impact of eco-tourism on sensitive environments and cultures is still very controversial. Here we provide a list of tours available that are trying to protect these lands and benefit the cultures that live here.

The Iditarod Sled Dog Race is one of the most famous sporting events in the world and we put you in the middle of it! Experience the unmatched excitement of the start of the Iditarod Sled Dog Race. Watch frenzied, leaping sled dogs straining at their harnesses to begin the 1000 mile race to Nome as anxious mushers and their handlers battle to control the excited dogs. Be part of the race by being a dog handler at the race start. Mingle with the mushers and race personnel along the trail at the McGrath, Nikolai, Takotna. Unalakleet, and White Mountain checkpoints. Join us for the wild celebration in Nome as the 1st musher crosses the finish line to claim their spot in Iditarod history.

Metlakatla, Alaska is a community of Tsimshian people who followed a missionary of the Anglican Church of England, Mr. William Duncan to a new home in the United States of America from their previous home in British Columbia, Canada. The United States Congress granted recognition to the new community in 1891 by creating the Annette Islands Reserve, a federal Indian reservation. Today it is the only reservation in the State of Alaska. The community has prospered due to an abundance of natural and human resources. Its people exhibit a great variety and diversity of skills in numerous fields, from native art in the ancient style to advanced computer skills necessary for today’s communication requirements.

Although the majority of its population is Tsimshian, Metlakatla also is home to may individuals with diverse tribal affiliations such as Tlingit, Haida, Aleut, Yupik and other Alaska Native peoples. These others are allowed to become members of the Metlakatla Indian Community by virtue of a clause in Metlakatla’s charter that specifically allows such membership. In the ancient Tsimshian culture there were several individual tribes, each with its own chief and governing council. Within the tribes there exists a closer society–that of the four major clans. The clans are the Eagle, or Lachsgeek; the Raven, or Gunhada; the Wolf, or Lachgeebuu; and the Killer Whale, or Gisbuutwada.

Metlakatla Tours Director, Pat Beal; open beginning of May through the end of October. Scheduled tours including community on buses, culminating in traditional Tsimshian singing and dancing with full reglaia. A must see!

The highlight of the cruise is a one-hour stop at the Chena Indian Village, where Alaskan Native guides will take you on a guided tour. You’ll see an Athabascan Indian village with cabins made of spruce logs, a cache used for storing supplies, and fur pelts. Our guides will explain how the wolf, fox, martin, and beaver were used to provide food and protection in the harsh Arctic climate.

Guides will show you a spruce bark hut, which Athabascans used as primitive shelters, and an authentic birch bark canoe made without any metal fasteners. To the side of the cabin are hides of the largest game animals in the Interior–moose, bear, and caribou (the type that Chris McCandless hunted in Into the Wild). You’ll learn how Athabascan Indians called animals, how they tanned the hides, and how they preserved them.

Northern Alaska Tours offer exciting opportunities for guests to explore Alaska’s Arctic.   One such experience is the Barrow Expedition. The other new tour offering is the Kotzebue adventure and a third offering is a Fairbanks by Air adventure.

An Alaska travel experience would not be complete without an opportunity to experience firsthand the vast wilderness expanses and the fascinating cultures that are Alaska’s Arctic.

Northern Alaska Tour Company pioneered Arctic Circle touring on Alaska’s Dalton Highway. Today they take pride in being the operator of choice for those traveling in Alaska’s Arctic. One day and multi-day excursions, available both during summer and winter, allow the traveler to experience the region in a comprehensive yet economical way.

These are just a few of the eco-tourism options available to people in Alaska. Have any more to share? Add to the comments below…