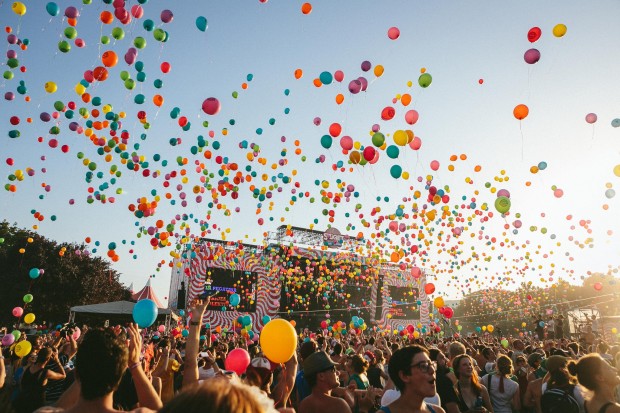 With spring looking bright and summer just around the corner, travel-lovers everywhere are rubbing their hands together in gleeful anticipation of what awaits their backpacks and suitcases this summer. Here at DontFlyGo.com we’re just as swept up in travel-fever as anyone else, busily making our plans and finalising our itineraries while remaining steadfast and committed to our ecological roots.

What’s most catching our attention however is the sheer number of amazing events that seem to be happening in and around Europe this summer. Accessible via train, bus or car, all of these can be reached without flying and all promise to be smash hits when it comes to combining travel with unbridled fun and spectacle. Here we take a look at eight big ones.

Taking place in the region of Valencia, in the little town of Buñol, is one of Spain’s most iconic festivals, La Tomatina. We’ve long been fans of this but haven’t yet had the chance to go. Off-the-wall in the sense that the event hinges on throwing tomatoes at the crowds of people in the streets, its a lot less brutal than Spain’s bullfights and probably a lot more sociable to boot. Water cannons signal the end of the action, but not before your clothes are stained enough in red to welcome the cool jets from above. Takes place on August 26th.

The Gay Pride festivals are hugely fun wherever they take place around the world. The Dutch capital’s though, which takes place between July 31st and August 2nd, usually lives up to its reputation as one of the best. Vibrant, lively and crammed full of partying people on boats, Amsterdam Pride is hard not to have fun at, regardless of your sexuality.

Another massive street party that centres on social inclusion is that of London’s ubiquitous Notting Hill Carnival. Having gone down every bank holiday since 1966 (the last time the country won the World Cup ironically enough), Notting Hill Carnival infuses Caribbean sound and culture with the upscale modernity of West London. Catch it between August 30th and 31st.

The world’s largest techno street parade that promises to pump up the volume and bring people together in warm, sweaty hugs? Yes please. That’s the Zurich Street Parade for you, Switzerland’s number one free event that promotes human peace and tolerance while letting the alcohol and good vibes come along for the ride too. Hits the streets on August 29th.

Opening summer with a bang is the UK’s most famous race-day event that has people glued to their TV’s across the country. The Royal Ascot Grand Finale, which takes place across June 16th to June 20th, is prestigious, legendary and, dare we say it, bags of fun. In 2013 the Queen watched her horse triumph in the Gold Cup, while many other celebrities also see their trusty steeds ride to glory too. This is the place to rub elbows with aristocracy, the rich and the famous and also have an amazing couple of days outside on the track.

Hungary’s eagerly-anticipated Sziget is one of Europe’s biggest musical festivals that always packs out a crowd with its amazing line-ups of international acts. Set to happen between August 10th and 17th, this year’s festival looks to be the best yet, with acts like Florence and the Machine, Kasabian, Robbie Williams and Avicii already announced.

Earning its place in literary lore thanks to Ernest Hermingway’s masterpiece Fiesta (The Sun Also Rises), Spain’s San Fermin is possibly one of the world’s best known street parties thanks to the iconic image of the bull. Taking place in Pamplona between the 6th and 14th of July, San Fermin’s key event is the Running of the Bulls but aside from that there’s plenty more to experience too. From fireworks to fiestas, San Fermin has it all.

Cornwall’s premier beachside festival, Boardmasters, combines all the fun of the fair with live music, sporting events, beach-related fun and a whole lot more. Taking place in Fistral Bay and Watergate Bay, between the 5th and 9th of August, Boardmasters key attraction is its surf competition. This year’s event also promises music from the likes of Faithless, Bastille and De La Soul too.

With so much to pack in this summer make sure you start making your plans right now. The DontFlyGo.com team hopes to catch you at some of these!