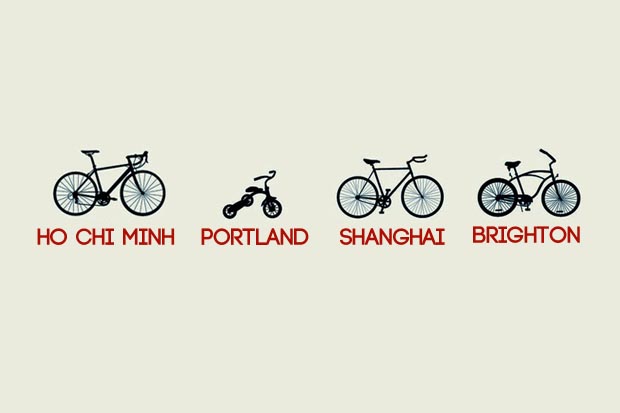 The simplicity, elegance and green nature of bicycles make them my favourite overland vehicle. Every major city I travel around the world seems to have evolved its own culture out of the terrain and interests of the cities residents. In today’s post, I want to feature four cities, each with its own bike culture and unique bicycling event.

Zoobombing is a biking activity held weekly in Portland, Oregon, in the United States. This event started in 2002, and all the participants ride children’s bikes rapidly down the West Hill. The participants of this event carry their bicycle on MAX light rail, and proceed to the Washington Park station, which is beside the Oregon Zoo. Then, they take an elevator to the surface and ride the bikes downhill within the vicinity.

The Zoobombers or participants are composed of a wide demographic, with a majority made up of young adults. The event is lighthearted, and it gives people a chance to meet and socialize with others. Riders even dress up in all sorts of costumes and decorate their bikes. Zoobombing sends a positive message in the community by supporting bicycle advocacy as an eco-friendly mode of transportation.

The Shanghai Alleycat race of 2012 was one of (if not THE) the biggest alleycat races in the world. About 600 participants joined in the street race, which was triple the number of attendees in the past year. Since the participants are required to race through public streets, the organizers had to be careful about keeping the start point a secret. On the day of the race they directed everybody to an underground car park where they started the race in sets of 10 to avoid detection form the police. The course was about 25 kilometers, and it varied based on the route that each rider took between the checkpoints. Plans for next year’s race are underway.

Since 2006, Brighton residents have been stripping down and saddling up for the annual naked bike ride. This activity celebrates the joy of cycling and vulnerability of all cyclists on the road. In fact, the ride also serves as a protest against the use of cars and consumption of fuel. It’s organisers wish to promotes the value of bicycling as an environment-friendly means of transportation.

Aside from generating attention from spectators, the naked bike ride represents the fears and vulnerability of cyclists that share the road with larger vehicles. Participants from all over the world join in this event, in the name of camaraderie and activism.

H2H is an annual bicycling event in Vietnam, which began in 2008. It was organized by volunteers and supported by beneficiary charities. Most of the volunteers were English teachers from Ho Chi Minh City who aim to help Vietnamese children who are deprived of education and proper healthcare. By encouraging participants to join in this 2000-km course, the organizers raise funds to help alleviate child poverty in the country.