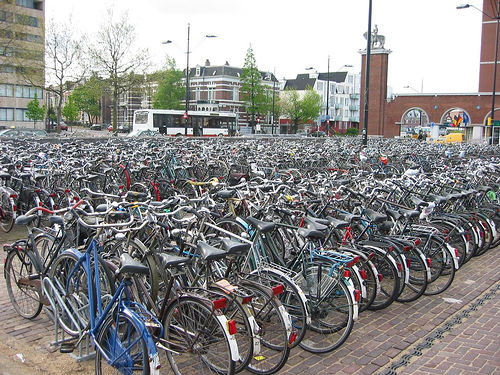 In the U.S., even running basic errands or commuting to work on a bike can seem impossible. With traffic lanes and roads made entirely for cars, few bike lanes, impatient drivers and a general lack of understanding about road rules for bikers, the U.S. is definitely not the ideal place to try to get around via bike.

But, if you long for a lifestyle that isn’t dependent on cars and want to reduce your carbon footprint, you might consider visiting or even one day moving to one of the world’s most biker-friendly countries. Check out this list of five countries where just about everyone owns a bike, bikes own the roads and owning a car is optional.

1.     The Netherlands: This country boasts a cyclist population of 99.1 percent, compared to the 32 percent in the U.S. In short, there are almost as many bikes as there are people in The Netherlands. Nearly 30 percent of all trips made in the Netherlands are done on a bicycle and 25 percent of residents ride their bikes to work. On average, residents ride their bike an average of 2.5km, or 1.5 miles per day. Amsterdam, the country’s largest city features 400 km of bike lanes and a bicycle commuter rate of over 40 percent.

3.     Germany: The long-standing culture of biking in Germany means that generations of families have grown up biking, so they’re all respectful drivers and experts at sharing the roads with cyclists. Seventy-five percent of the country’s population is cyclists and 9 percent of all trips are made by bike.

4.     China: In China’s most populated city, Shanghai, 60 percent of residents ride their bikes to work every day. And with just over 19 million residents and more than 9 million bikes, the bike per resident ratio means that drivers and foot pedestrians are understanding and respectful of bikers and bike rules.

5.     Japan: A popular alternative to motorbikes and motorcars, bikes are one of the best ways to get around Japan. With a cyclist population of 56 percent of the country’s total population, there are more than 70 million bikes on the roads. Almost 15 percent of citizens ride their bikes in to work or ride them to train stations. Biking in Japan also means less road traffic, less train congestion and increased health.

Biking is good for your health, good for the environment and good for the community. You can increase biking visibility in your community by biking more and encouraging others to join you. Remember to follow biking safety rules and educate others about how to properly ride a bike on the roads or how to share the road with bikers. Traveling during the summer months? Keep cool with these tips from HCCMIS and get the most out of your international biking experience.